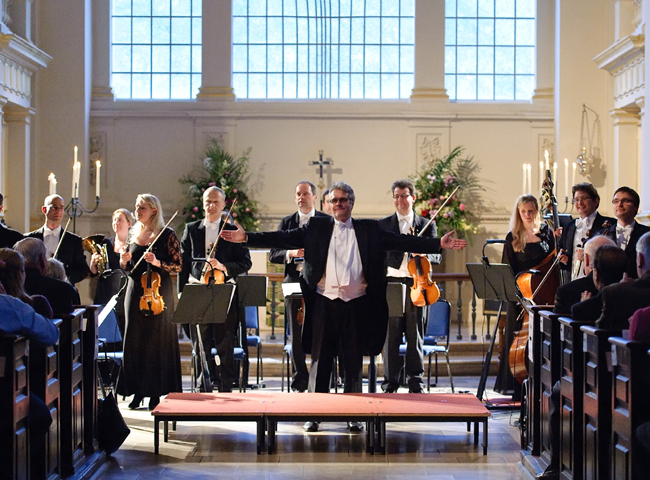 Part of the Brandenburg Choral Festival of London

Robert (Bob) Porter began studying the bassoon aged 11 and at 14 was accepted as a Junior Exhibitioner at the Royal Academy of Music. Two years later, after playing with the National Youth Orchestra, he decided to give up all thoughts of a future in maths, and instead began a career which now encompasses Musician, Conductor, Teacher, Concert Promoter and Artistic Director.

After studying at the Guildhall School of Music and Drama Bob worked as a musician and teacher, returning to Guildhall to teach in the Junior Department from its inception and becoming Head of Wind and Percussion in 1985 – a position he still holds today. As a performer he plays regularly with the London Mozart Players and has worked with every major professional orchestra in London.

Brandenburg Sinfonia is in great demand abroad and has, in recent years visited France, USA, Bermuda, the Channel Islands, Barbados, Cyprus, Malta and St Petersburg. The varied range of activities undertaken by the orchestra include a major concert series at St Martin-in-the- Fields and a major Classical Music cruise on the QE2. One of the recent highlights was an International Opera Gala conducted by Richard Bonynge in the presence of HRH Prince Charles. A large number of artists of international standing have worked with the orchestra including Richard Bonynge, Yvonne Kenny, Emmanuel Hurwitz, Lesley Garrett, John Georgiadis, John Wallace, Emma Kirkby, James Bowman and Gordon Hunt. Its repertoire ranges from Bach to Lloyd Webber and its members give over one hundred performances of orchestral, chamber choral and operatic music during the year.