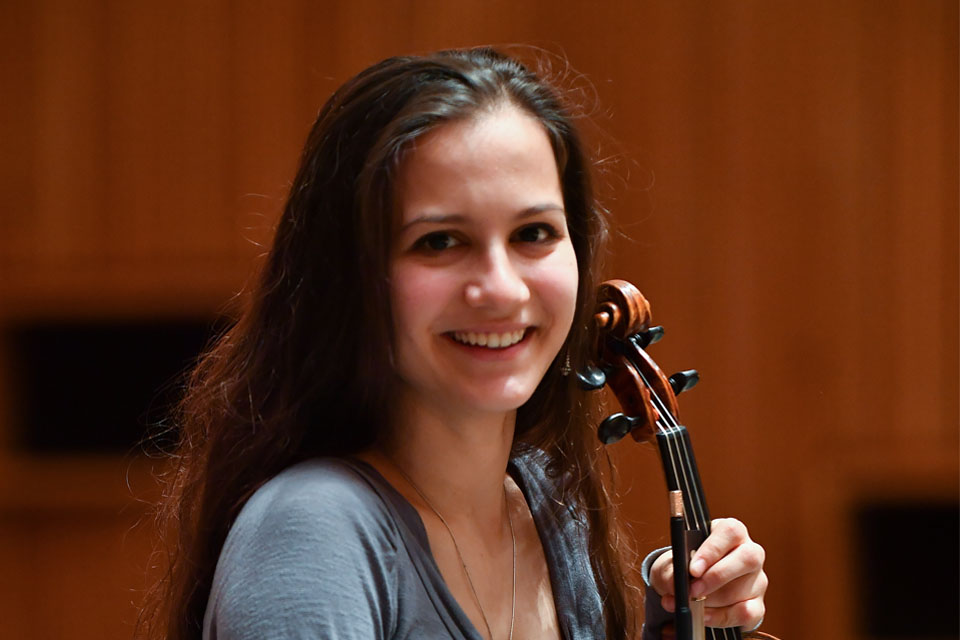 Representing the Royal College of Music

Romanian violinist Maria Gîlicel is an emerging performer recognized for her versatility and passion on stage. Maria has just obtained her Masters in Performance with Distinction under Professor Maciej Rakowski at the Royal College of Music (London). She is currently taking her Artist Diploma degree at the RCM and she is a Dasha Shenkman Scholar supported by the Albert Cooper Trust. She has performed as a soloist, chamber musician and orchestra member in various venues including Wigmore Hall, Royal Festival Hall, Buckingham Palace, St. John’s Smith Square, the Romanian Cultural Institute of London and the National Auditorium of Madrid (Spain); and has worked with many acclaimed musicians including Patricia Kopatchinskaja, Maxim Vengerov, Nicola Benedetti, Mats Zetterqvist, Christoph Richter, Pavel Fisher, Alina Ibragimova Mari Tampere-Bezrodny. She took part in the BBC Symphony Orchestra Pathway Scheme and went on tour with the Chamber Orchestra of Europe as part of their Academy. Maria plays on a Giovanni Francesco Pressenda violin (Turin, 1843) and a James Tubbs bow kindly loaned from the Royal College of Music. She is part of the Tillett Trust Young Artists Platform has also been awarded the Royal Philharmonic Society Emily Anderson Prize for soloists.

Turkish-American pianist Tolga Atalay Ün is currently in his second year of postgraduate studies (MPerf) at the Royal College of Music, London, studying piano with Prof. Norma Fisher, where he is a ‘C. Bechstein Scholar supported by a Christopher Hogwood Scholarship’. In September 2016, Tolga Atalay Ün was selected as a scholar to the ‘Young Musicians on World Stages’ (YMWS) project created and mentored by Güher & Süher Pekinel with financial support of TÜPRAŞ. He is also generously supported by Sevda-Cenap And Music Foundation and Talent Unlimited. His recent successes include the Beethoven Medal from the Worshipful Company of Musicians as a result of winning the First Prize and the Thomas Harris Beethoven Award at the Beethoven Piano Society of Europe’s 2017 Senior Intercollegiate Piano Competition; the First Prize at the Kendall Taylor Beethoven Competition at the RCM; the First Prize, the Prize for the Best Performance of A.A.Saygun and the Audience Prize at the 4th Ahmed Adnan Saygun Piano Competition in 2017 and the Second Prize at the Broadwood Horniman Harpsichord Competition in November 2015.