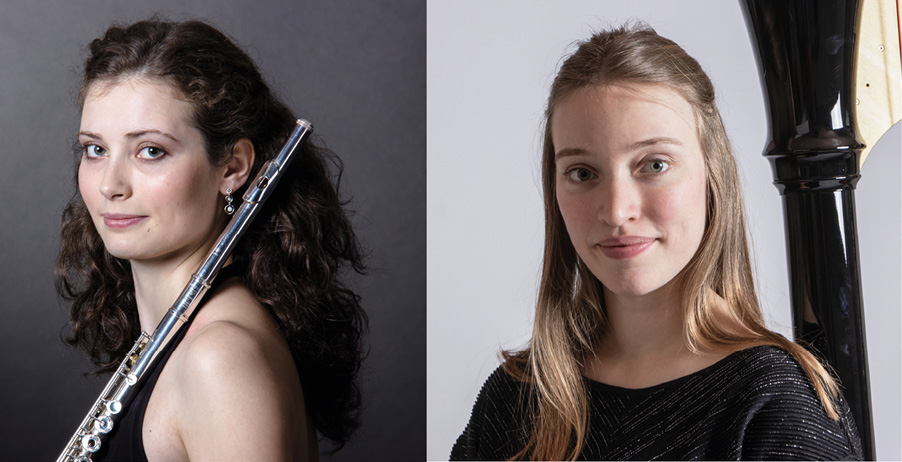 Anna Kondrashina is a prizewinner of several prestigious competitions, such as the Kobe International Flute Competition in Japan and the Nicolet International Flute Competition in China. She has been awarded the Worshipful Company of Musicians Silver Medal in the UK. In 2018 Anna was invited to join the London Philharmonic Foyle Future Firsts Development Programme and the Philharmonia MMSF Instrumental Fellowship Programme the following year.

Apart from her rapidly raising career as a modern flautist, Anna is very keen on historical performance. She has performed as part of the Kohn Foundation Bach Cantatas series at the Royal Academy of Music. In February 2019 Anna performed the first flute in Bach’s St Matthew Passion, directed by Trevor Pinnock.

In 2019 Anna completed her Master of Arts in Performance at the Royal Academy of Music in London, with the renowned flautist William Bennett.

Lise Vandersmissen, born in 1996 in Belgium, studied for her Bachelors Degree with Lieve Robbroeckx in Belgium and completed her Masters Degree with Imogen Barford at the Guildhall School of Music in London. She is currently part of the Fellowship Programme in the Guildhall.

Lise won prizes in competitions in Belgium, the Netherlands, Poland, Hungary, Hong Kong and England. She recently won the Third Prize at the North London Harp Competition 2019 and was awarded the Guildhall Harp Prize 2019. She won a place at the London Sinfonietta Academy and the Académie Camac in France, and she was a finalist in the Croydon Concerto Competition 2019.