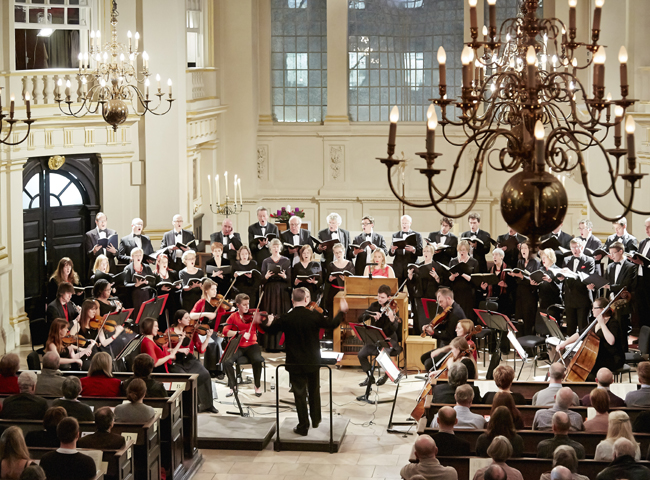 They have now given over 700 concerts at the famous Trafalgar Square Church where they are firmly established as the most popular of the principal orchestras, attracting large international audiences to their fortnightly concerts.  A recent highlight was a concert given in the presence of HRH Princess Alexandra.

The Orchestra was originally established to enable exceptional music graduates the opportunity to bridge the gap between leaving conservatoire and finding full-time employment, within a professional environment.

Now a seasoned fixture on the London musical scene, the orchestra receives no subsidies or sponsorship, relying purely on enterprising programming and box office receipts.

The Orchestra has appeared at The Banqueting House in Whitehall, St Clement Dane’s Church, St Paul’s Church Covent Garden, The Blackheath Halls and they have established an ongoing concert series at St James’s Church, Piccadilly.  As well as performing in the capital, the Ensemble has appeared at numerous Festivals and Music Societies around the country, from Somerset to Sussex, Ludlow to Northampton as well as a recent concert in Chelmsford Cathedral.

Belmont has close links with Classic FM, which has included giving the stations first ever Christmas Day Concert, since then Classic FM has broadcast many Belmont Ensemble concerts live from St Martin-in-the-Fields.

In 1994 The Orchestra recorded Walton’s Façade, and other works incorporating the poetry of John Betjeman and Roald Dahl, narrated by Benjamin Luxon CBE. This received critical acclaim in the USA “The orchestra’s playing is light, playful and precise”.