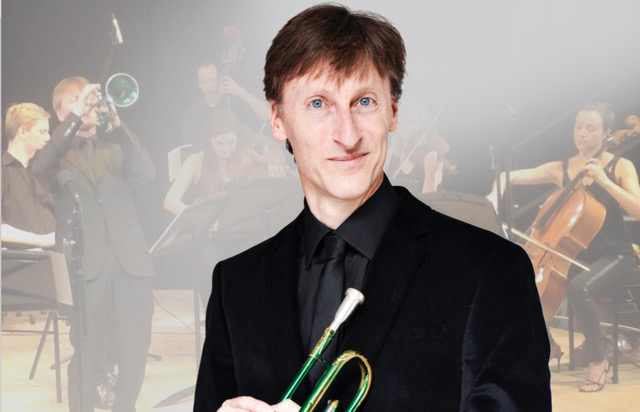 This performance is based on ‘Pavane’, Paul’s critically acclaimed album. This collection of original compositions is an exquisite, atmospheric, melody-rich fusion of jazz and classical music. Paul has never felt restricted by musical boundaries and in ‘Pavane’ he combines the freedom of jazz with the rich sonorities of classical music. The pieces are in song form in a classical style with an emphasis on melody and counterpoint, but with the unmistakable beat of jazz.

In concert the jazz ensemble is complemented by the melodious sounds of a cello. Paul’s trumpet flows throughout the different soundscapes with a voice that is in turn seductive and playful.

‘Pavane’, the performance, features compositions from the album, supplemented with a selection of well-known favourites.

“I’ve never been sure if I’m a bigger fan of Paul’s trumpet playing or his marvellous composing talents as they’re both monumental! Paul Higgs is a world-class composer and trumpet player.”

“Paul is the most versatile musician I’ve ever met. Playing, MDing, composing, arranging – you name it, Paul has it superbly covered. He seems to “get” music the way other people breathe.”

Paul has an extensive musical career in many fields including performing, composing and arranging music for film, TV and theatre. Formerly a leading performer and composer in NYJO, he then became a Musical Director for the National Theatre and the RSC. He has performed with Sir Peter Maxwell Davis, BBC Philharmonic Orchestra, Johnny Dankworth, Rosemary Clooney, Lulu, John Williams, Nancy Wilson and Shorty Rodgers.

Natalie Rozario studied at the Royal Academy of Music. She is a founder member of the Trio Bernaola with whom she has toured Venezuela, Spain and the UK. She has also performed extensively with Killian String Quartet in England, Ireland and continental Europe. She is a member of the TS Ensemble, a jazz-based collective.

George is a respected and published drum educator, notably for Trinity College, London. He tours with Jack Jones and has played with Marc Almond, Ruthie Henshall and Kym Mazelle and for West End shows Wicked, Guys and Dolls, Avenue Q, Sinatra and Anything Goes. He drums with Jazz At The Movies, the Ray Gelato Quartet and curates Hadleigh Jazz Club.