Home > What’s on? > Tagged as Café in the Crypt > The Reliables 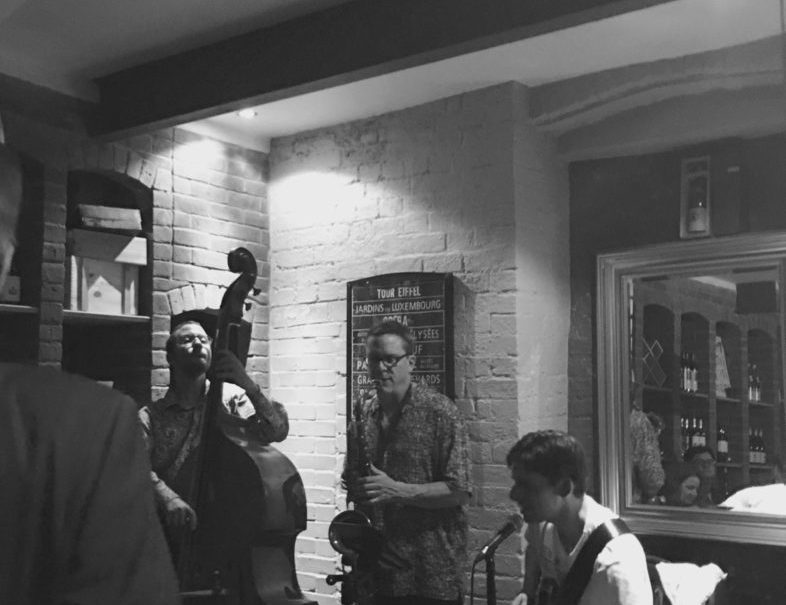 David was born in L.A. and now lives in London.  He studied music at San Francisco State University and at the Ali Akbar Khan College of Music, and studied privately with Joe Henderson, Steve Coleman, Larry Schneider and Hal Stein.

He has toured North and South America and Europe and played in many ensembles including Quijeremá; earRotator; The Oakland Opera Theater; Undercover Ska; The Klezmorim; Klezmania of San Francisco; The Hornal Family Band and the Toybox Band.

He has also appeared on numerous recordings as a saxophone sideman for artists such as Rafael Manriquez; Quijeremá; Jack Gates; Richard Lobb; The Loose Acoustic Trio; Maria Acuña; Klezmania of San Francisco; and Mark Schleunes.

David has written many original songs, and composed and arranged music for narrative and documentary films, computer games including “Lego Island”, and his music has appeared in the BBC drama “The Driver”.  He co-wrote songs that appear on Mark Schleunes’ CDs “Mongrel” and “The Future Was Fun”, arranged music for Quijeremá and for Quique Cruz’s documentary film “The Archaeology of Memory”, and wrote opera pieces for The Oakland Opera Theatre’s productions “Mask of Thorns” and the Lorca play “Así que Pasen Cinco Años”.

David is also the owner of indie label “Hounds of Renown Records”, on which he has produced four CDs, including two under his own name (“House Music”, and “Dead Man’s Cake”); and two collaborations with other musicians: the late great Rafael Manriquez (“Canto al Poeta”, poems of Pablo Neruda); and Mark Schleunes (an anti-war CD by “earRotator” entitled “Holy Empire”).

Robert has studied a wide range of musical styles ranging from Flamenco to classical, rock and Jazz. He has performed internationally, including tours in his native Germany and has appeared on broadcasts and numerous recordings. Recent recordings include albums with Jazz – fusion band “Beholder”, Indy Rock band “Doghouse” and a 2016 released musical meditation on the Lord’s prayer.

Robert is a regular song writer and vocalist and has worked with Jazz and Pop groups as a lead and backing singer.

Bassist Michael Searl is a busy session musician based in London. Past credits include playing Bass for the Royal Shakespeare Company’s 2012 African production of Julius Caesar, playing Double Bass and co-composing the music for the play “Obama The Mamba,” and playing Bass for the highly acclaimed 2014 “Three Minute Heroes” production – which saw him perform alongside original members of The Specials and The Selector.

Sophie Alloway is a busy freelance drummer, based in London, working in a variety of musical settings for a wide range of artists.

She played drums for rapper Roots Manuva for two years; touring the UK, Australia and New Zealand with him. As well as appearing on Later With Jools Holland, Mercury Music Prize and BBC Introducing she has played top festivals including Glastonbury, Hop Farm and Bestival; whilst also touring with the Michael Jackson musical ‘Thriller’. She was the drummer in a recent Sky TV advert and YouTube videos featuring Sophie have reached over a million views.