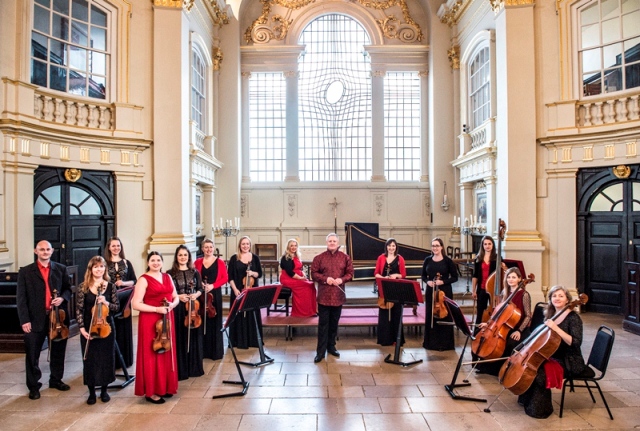 The Belmont Ensemble of London was founded by its Musical Director, Peter Dyson in 1991, winning instant critical acclaim.  It is now one of the busiest and finest chamber orchestras in the capital. The Belmont Ensemble was the pioneering force in establishing the famous series of baroque concerts at St Martin-in-the-Fields in the early 1990s They have now given over 750 concerts at the famous Trafalgar Square Church where they are firmly established as the most popular of the principal orchestras, attracting large international audiences to their fortnightly concerts.  A recent highlight was a concert given in the presence of HRH Princess Alexandra.

The Orchestra was originally established to enable exceptional music graduates the opportunity to bridge the gap between leaving conservatoire and finding full-time employment, within a professional environment. Now a seasoned fixture on the London musical scene, the orchestra receives no subsidies or sponsorship, relying purely on enterprising programming and box office receipts. In 1996 the Ensemble made their acclaimed debut at the Purcell Room, and in 1998 made their sold-out debut at the Queen Elizabeth Hall. The Orchestra has appeared at The Banqueting House in Whitehall, St Clement Dane’s Church, St Paul’s Church Covent Garden, The Blackheath Halls and they have established an ongoing concert series at St James’s Church, Piccadilly.  As well as performing in the capital, the Ensemble has appeared at numerous Festivals and Music Societies around the country, from Somerset to Sussex, Ludlow to Northampton as well as a recent concert in Chelmsford Cathedral. Belmont has close links with Classic FM, which has included giving the stations first ever Christmas Day Concert, since then Classic FM has broadcast many Belmont Ensemble concerts live from St Martin-in-the-Fields. In 1994 The Orchestra recorded Walton’s Façade, and other works incorporating the poetry of John Betjeman and Roald Dahl, narrated by Benjamin Luxon CBE. This received critical acclaim in the USA “The orchestra’s playing is light, playful and precise”. Belmont Recordings was quickly established, releasing more CDs including Vivaldi’s Four Seasons and Mozart’s two Sinfonia Concertante. The Ensemble also appeared in a Channel 4 TV documentary, as well as the recent Channel Five TV series about St Martin-in-the-Fields. The Belmont Ensemble is a highly flexible group with a dedicated core of string players for baroque music; it can adapt to encompass forces for large romantic concertos and choral works, to contemporary commissions. Belmont Ensemble members, past and present, can be found playing in all of the leading British orchestras including The Philharmonia, LPO, LSO and RPO, CBSO, Britten Sinfonia, English Concert and OAE and well as The Royal Opera House and English National Opera Orchestras.