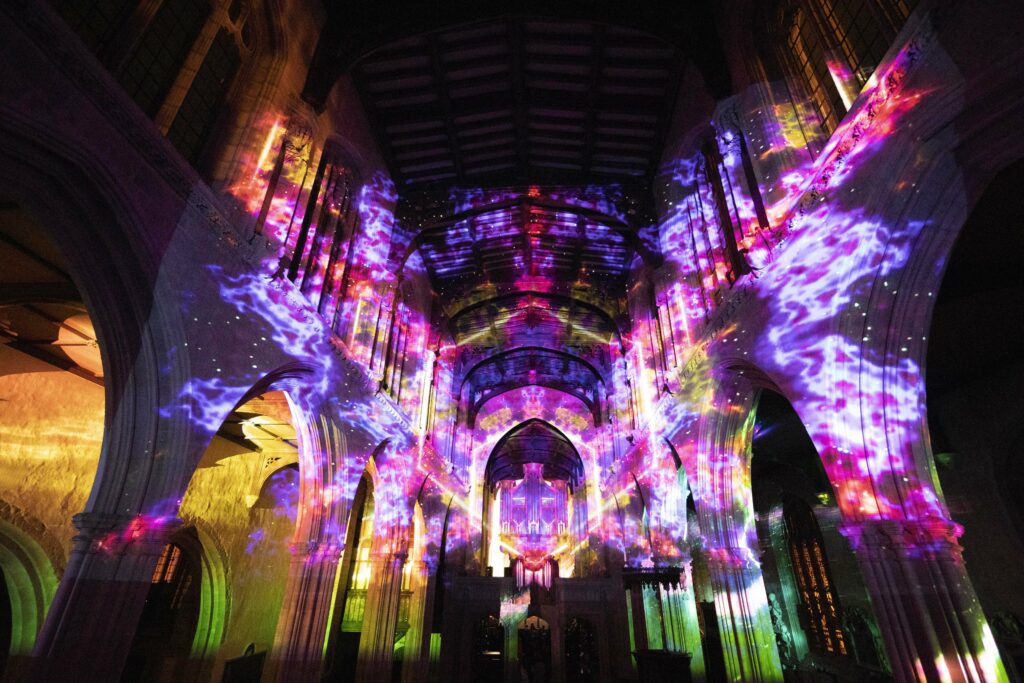 ‘Space, The Universe, and Everything’

(This event is an hour long. To manage the flow of people through this immersive exhibition, we are running staggered admission times at 15 minute intervals.)

An opportunity to ponder our relationship with the planet Earth and beyond is explored in a fantastic sound and light experience.  Installations of sound and light art take visitors on a journey through space, to see galaxies emerge, and a chance to explore humanities ambition to adventure beyond.

The exterior of St Martin in the fields is adorned with sound and light art where viewers can be drawn to the impact of the majestic architecture and will see the spectacular imagery projected onto the facades telling the story of human exploration.

In the Interior of St Martin in the fields, the architecture is exposed of its beauty as it is highlighted by the artwork that is projected throughout, the audience walks through the light artworks and are immersed in installations throughout the interior of the space which are all set to bespoke music.

Visitors have the chance to see original footage of the rocket launch, explore the creation story and the Big Bang within the sacred space and view the final image of Earth as if looking back from space under a galaxy of stars.

Just as Neil Armstrong, Buzz Aldrin and Michael Collins stated: “We are so tiny in the system of things”

The Artistic collaboration known as ‘Luxmuralis’ which means Light Murals in Latin, create large scale, site specific installations taking art and creativity to varied spaces across the UK and Europe.

The sound compositions you hear is bespoke music created, produced and recorded by David Harper who has written and produced music for a wide variety of TV, film and theatre productions incorporating sonic art, mixed media and art installations over his expansive career in the music industry over the last twenty years.

The music is combined with the visual artwork that is created by Artist and Sculptor Peter Walker (www.peterwalkersculptor.com) whose work adorns towns and cities both nationally and internationally consisting of large-scale sculpture, commissioned and bespoke sculptural works as well as paintings, drawings, film, and sound and light installations.

Luxmuralis take son-et-lumiere (sound and Light) art to a variety of places and spaces, outdoors on large scale public facades, statues and unusual creative spaces and also has currently been attracting attention for UK Cathedrals bringing thousands of new visitors and pilgrims through the doors of such sacred buildings.

‘Space, The Universe, and Everything’ is a spectacular immersive journey for people to walk through and explore the space of the Cathedral in a new light, the artwork asks visitors to look out into space and think about what humans have achieved in our place in the world as well as reflecting on their own relationship with the sacred space they are in.