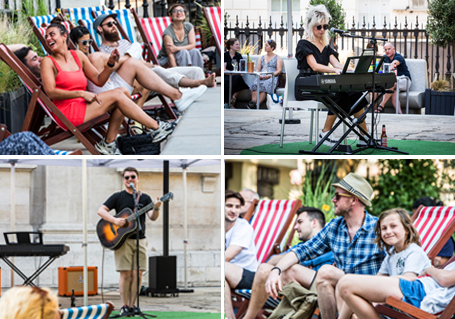 Drop in after work, grab a wine or beer and a deckchair and unwind to some great live bands. Or come at the weekend with friends and family to enjoy a leisurely afternoon in the sun (we hope!) Entry to the Courtyard is entirely FREE!

After a series of mashup videos filmed on her iPod touch went viral in 2014, Emma gained local and global recognition as a singer. The same year, Emma reached no.3 in the iTunes Singer/Songwriter charts with Little Lion Man.

Emma was discovered by producer, songwriter and record company Raz Nitzan leading to a number of collaborations accumulating over 1 Million streams and a spin on Armin Van Buuren’s ‘A State of Trance’.

Emma had the opportunity to perform for Prince Harry and Meghan in 2018 and has been establishing herself as an exciting new pop artist with her latest releases.

Her series of singles have been described as ‘Storytelling with commercial sensibility’ and ‘Electro-tinged Pop Songs’.

Come and celebrate summer with a free programme of live music in St Martin’s Courtyard! Today's performers are Joe Slater, and Gi-Gi