Home > What's On Events > Lecture series > What Am I Living For? Searching

What Am I Living For? Searching 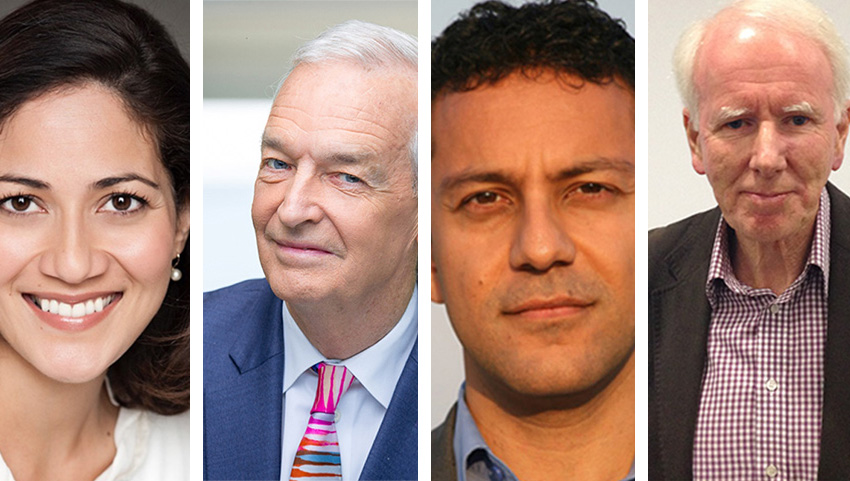 In this lecture four leading journalists come together to discuss their search for meaning in all they have witnessed as journalists, reporting on events from around the world which have changed history and the way we live.

Book a ticket to attend in person

To book a ticket, please click the yellow “Book” button above right or below.

Mishal Husain joined the BBC Radio 4 Today presenting team in 2013 and also appears on the news on BBC1. She was previously a presenter on BBC World News and has made critically acclaimed documentaries on Malala Yousafzai, the life of Mahatma Gandhi and the ‘Arab Spring’ uprisings. Her book is called The Skills: How to Win at Work.

Aleem Maqbool has been BBC’s Religion Editor since 2021, providing analysis and insight on the major themes and issues affecting different faiths in the UK and around the world. Previously BBC News’ North America Correspondent, Aleem was based in Washington DC. He has worked for the BBC for more than 20 years reporting on political and social news stories across the USA and beyond for TV, radio and online audiences. His previous postings include Pakistan Correspondent and Gaza/West Bank Correspondent.

Jon Snow was the face of Channel 4 News from 1989. He joined ITN in 1976 and became Washington Correspondent in 1984. Since then, he has travelled the world to cover the news – from the fall of the Berlin Wall to Barack Obama’s inauguration and the earthquake in Haiti. His many awards include the Richard Dimbleby Bafta award for Best Factual Contribution to Television, and Royal Television Society awards for Journalist of the Year and Presenter of the Year. He has also made several documentary films and chaired television debates about matters ranging from GM foods to religious persecution.

If you cannot attend in-person, this lecture will also be streamed live online. For tickets to watch online, click here.

We want to make sure that the Autumn Lecture Series is open to all. Free places are available for each lecture, in person and online.

If you can, please consider buying a ticket for £10 for you or for someone else. Your purchase will help keep our education programme open to all.

What Am I Living For? God

Are the words God and meaning identical? In our opening lecture we reflect upon God as the object of our search for meaning.

What Am I Living For? Life, Death and Friendship (livestream)

In this lecture Timothy Radcliffe looks at life and mortality and the way that the gift and grace of friendship brings meaning to all we have lived through, hope for our future and upholds who we are now.

What Am I Living For? Life, Death and Friendship

In this lecture Timothy Radcliffe looks at life and mortality and the way that the gift and grace of friendship brings meaning to all we have lived through, hope for our future and upholds who we are now.

What Am I Living For? A New Heaven and a New Earth (livestream)

Rowan Williams, one of the greatest spiritual leaders, theologians and teachers of our time, returns to St Martin’s to share his wisdom about the human search for meaning.

What Am I Living For? A New Heaven and a New Earth

Rowan Williams, one of the greatest spiritual leaders, theologians and teachers of our time, returns to St Martin’s to share his wisdom about the human search for meaning.